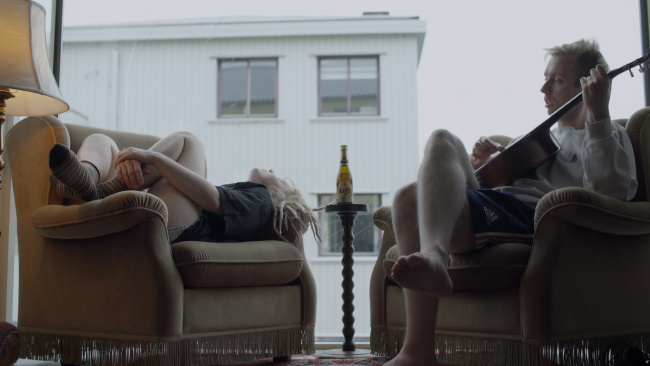 – cheers to feeling dirty each time the sun rises –

A part of our event in the Nordic House on the West Nordic day we will be screening Faroese movie Skál (2021). Free admission, seats based on first come, first get.

The West Nordic Day is held on September 23rd every year to increase the cooperation and strengthen the sense of closeness between the three neighbouring countries, The Faroe Islands, Greenland, and Iceland. Read more here

Following the film screening, the protagonists Dania O. Tausen and Trygvi Danielsen will be available for a Q&A session to answer questions from the audience.

Read more about the seminar here

Dania is 21 years old and grew up in a Christian community in the Faroe Islands’ Bible belt. She has just moved to Tórshavn and is seeing Trygvi, a hip-hop artist and poet locally known as Silvurdrongur (Silver Kid). He comes from a secular family and writes poems and texts about the shadow sides of humanity. Dania herself sings in a Christian band but is fascinated by Trygvi’s courage to write brutally honest lyrics. As she tries to find her place in the world and understand herself, she starts to write more personal texts. Her writings develop into a collection of critical poems called ‘Skál’ (‘Cheers’), about the double life that she and other youths must live in the conservative Christian world.