The Nordic House in Reykjavík is a cultural institution opened in 1968 and operated by the Nordic Council of Ministers. Its goal is to foster and support cultural connections between Iceland and the other Nordic countries. To this end the Nordic House organizes a diverse program of cultural events and exhibitions.

The house is the venue for front row activities in the Icelandic cultural calendar: Reykjavík International Film and Literary Festivals, Iceland Airwaves and The Nordic Fashion Biennale—launched by the Nordic House.

The Nordic House is designed by acclaimed Finnish modernist architect Alvar Aalto (1898-1976). The house is one of his later works, a hidden gem among the better-known masterpieces, and features most of Aalto’s signature traits. These are evident in the ultramarine blue ceramic rooftop that takes its organic shape from the mountain row in the background, the central well in the library and the extensive use of tile, wood and white plaster throughout the building.

Alvar Aalto also designed the furnishings in most of his buildings. In the Nordic house, all installed furnishings, lamps and almost all of the furniture are by Aalto.

Alvar Aalto is one of the most noted architects of the 20th century.He was born in 1898 in Finland and died there in 1976. He grew up in close contact with nature in a small town in the western part of the country.

When Aalto was a young man Finland obtained its independence, which awoke in him an awareness of his place in the international community. Early on he showed interest in the classical architecture of Greek and Italy, and was especially taken by architecture’s relationship with landscape.

In fact, many of Aalto’s buildings are inspired by the wing-shaped form of classical, open-air theaters. He was also influenced by modernist thought from at the beginning of the 20th century concerning simplicity and architectural utilitarianism. He developed these ideas along a rather artistic and personal trajectory, placing emphasis on natural materials and organic shapes, which lend his structures a gentle demeanor. His work was always been conceived with the human in the foreground and a conviction for close relationships between architecture and setting, man and nature.

“Architecture should spring forth from every location and circumstances. It is subject to a keen sense of form but must appeal to human emotion.”
Among Aalto’s earlier works is the municipal library in Viipuri, Finland (1927-1935), which has since become Vyborg, Russia. Here Aalto implemented his first cylindrical skylight, which is also found in the central space of the Nordic House in Reykjavík. Likewise, he sank a portion of the library’s floor creating a sort of hollow to diversify the use of space, an idea he later employed in a number of his buildings.

The Nordic House bears references to a number of Aalto’s other works, including the Paimio Sanatorium in Finland (1928-32) and the Villa Mairea house in Noormarkku, Finland (1938-39), which features his first example of interplay between manmade forms and the use of organic materials. Also referenced is Aalto’s own summerhouse, “The Experimental House,” in Muuratsalo, Finland, where he experimented with different types of bricks and textures, which, in turn, led to techniques like the use of glazed flagstone tiles, a material incorporated in various ways in his later works.

Many of Aalto’s structures surround a central space or courtyard, like Säynätsalo Town Hall (1949-52). Other buildings demonstrate variations on the wing-shaped auditorium like the Helsinki University of Technology at Otaniemi (1949-74), Seinäjoki City Theater (1960-69), and Finlandia Hall in Helsinki (1962-75) among others. 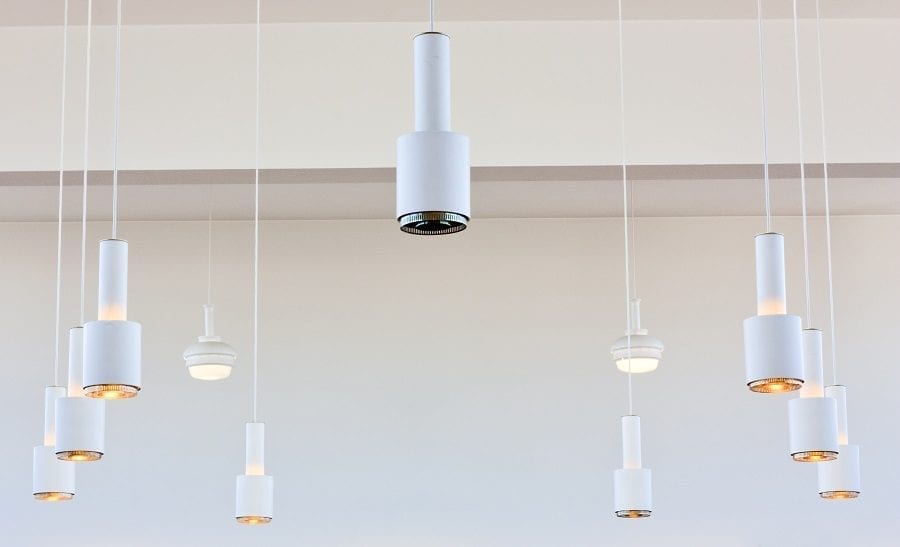 The Nordic House’s building is not large, but its location is a testament to Aalto’s keen sense of the setting’s landscape. Instead of creating an extravagant structure, he placed the house on a manmade landmass in the middle of a marsh, affixing a small pond to the house’s north side, which echoes the two larger ponds towards downtown. In this way, the architect has emphasized the unique natural aspects of the land as well as the reciprocal relationship between man and nature, architecture and setting.

The base of the building was built low and is white in color. But standing on top of the flat, rectangular roof is a distinctly prominent form rising above the ground floor covered in tiles glazed in dark purple.

Off the foyer is the house’s central space, which enjoys daylight from a dome-shaped skylight spread over the ceiling. The central space has access to the house’s library, the concert/conference auditorium, the office wing, and also the house’s café, which offers an excellent view over downtown Reykjavík all the way north to Mount Esja.
The library occupies an unusual space as its walls and ceiling are formed by the cone extending up from the middle of the building. The middle of the floor is sunken, leading to the lower level of the building. The entire space is awash with light, which pours in from a crystal-shaped skylight prominently placed at the top of the cone. The library’s collection consists of about 30,000 titles.

Next to the library is the concert/conference auditorium. The room’s unconventional shape and wood paneling on the wall provide excellent acoustics for both music and the spoken word.