Þórir Jóhannsson, double bass player, and Ingunn Hildur Hauksdóttir, pianist present works by Zoltán Kodály, Giovanni Bottesini, Max Bruch, Árni Egilsson, Karólína Eiríksdóttir, and Þórður Magnússon. The bass has gained momentum as a solo instrument in recent decades but still needs some introduction within the Icelandic music scene. Ingunn and Þórir began their collaboration in 2012 when they were to the international double bass conference in Copenhagen.

Þórir Jóhannsson earned his Postgraduate Diploma from the Royal Northern College of Music in Manchester and stayed for a few years in Denmark after graduation, where he worked freelance with some of the major orchestras on both sides of the Øresund. He moved to Iceland in the fall of 2000 and is now a member of the Iceland Symphony Orchestra. He teaches at Kópavogur Music School and has performed regularly with a quintet at the concerts of the renowned Chamber Music Club. Þórir has premiered various works for double bass, such as “Rhapsodia per Contrabasso et Piano” by Þórður Magnússon in 2011 and the piece can be found on the CD “La Poesie” which was released in 2013. 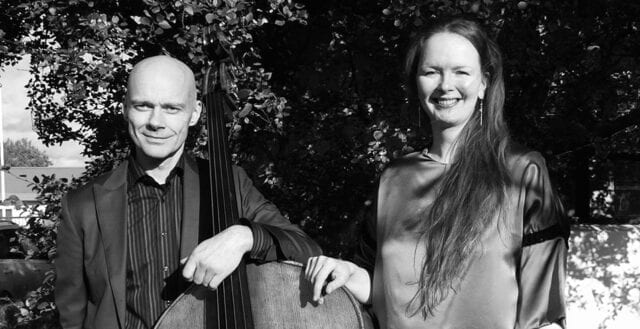 Ingunn Hildur Hauksdóttir studied piano at the Hafnarfjörður Music School and later graduated as a soloist and teacher from the Reykjavik College of Music. She studied with Roger Vignoles for two years and attended master classes with artists such as Dalton Baldwin, Nelita True, and György Sebök. She plays chamber music with groups such as Camerarctica and Notus trio and has toured the UK, Italy, and Spain with the latter. She has made recordings for radio and CDs and has played numerous concerts both in Iceland and internationally. In recent years she has performed regularly in the concerts of the renowned Chamber Music Club. Ingunn teaches piano at the Kópavogur Music School and Garðabær Music School and is an accompanist at the Reykjavík College of Music.

Tickets are kr. 3.000, kr. 2.000 for seniors, for students and guests under the age of twenty. Tickets available on tix.is and at the entrance. The concert series Klassík í Vatnsmýrinni (Classics in the moorlands) is organized in collaboration between the Icelandic Soloist Society and the Nordic House and places great emphasis on Scandinavian and international cooperation.

About the concert series

The concert series Klassík í Vatnsmýrinni is organized in collaboration between the Icelandic Soloist Society and the Nordic House. The aim of the series is to give the audience a chance to hear performances by the very best among Icelandic classical musicians, as well as guests from abroad, in solo concerts, recitals, and chamber music.