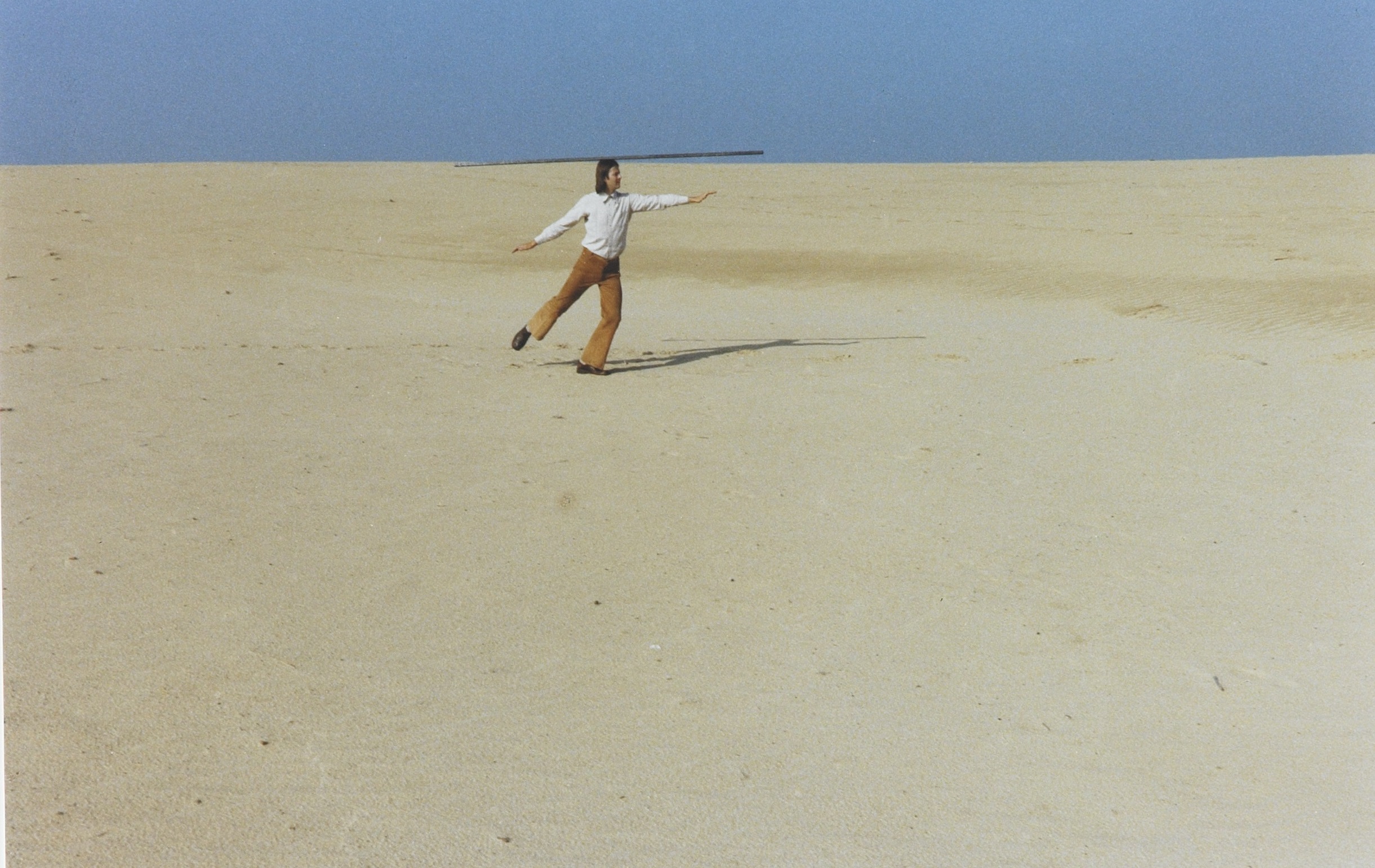 Welcome to the opening of Silent Space at The Nordic House, Tuesday, November 7th at 5 PM with a guided tour and an introduction from Nina Backman. Also present at the opening are Rebekka Guðleifsdóttir, Sigurður Guðmundsson and Sari Palosaari.

Silent Space – showcases works of seven Nordic artists whose positions address the interference of environment and personal space. The exhibition will take place in the foyer, the greenhouse, and the library.  Free/ open for all.
IMAGE: Sigurður Guðmundsson, Dancing Horizon, 1977. Courtesy of the artist and i8 Gallery, Reykjavík

Silent Space is a part of  Silence Project

Sigurður Guðmundsson (IS)
Dancing Horizon
1977
Sigurdur Gudmundsson’s (b. 1942) work is difficult to separate from the energetic, humorous, intelligent artist himself. His prolific and highly individual body of work includes photographs, novels, and giant replicas of chocolates in stone, metal, and lacquer. Since the 1960s, his varied and at times seemingly cacophonic achievements have gradually grown into an oeuvre that is also vigorous, succulent and original. Gudmundsson is one of Iceland’s most international artists, with homes and studios in Holland, Iceland and Sweden, and recently in Xiamen and Beijing. He has exhibited widely in Europe and has had commissions for major public works in the Nordic countries and in Central Europe.  www.i8.is

Sari Palosaari (FI)
Split stone with the sound of it splitting
2017
Stone, speakers, sensor
The work consists of two halves of a stone, with loudspeakers attached to them. To split the stone, Palosaari has made use of soundless cracking agent, an expansive mortar, that is developed for splitting rock and concrete in urban construction sites without any noise or vibration. When applying the silent technic to the stone, she noticed that the stone made sounds while cracking. For this work she repeated the process in a sound studio and recorded the sounds when the minerals inside the stone fall apart.

With a related concept Palosaari recently (2016) won the competition Secret Life of Buildings – Objects, organized by Centre for American Architecture and Design and University of Texas at Austin School of Architecture, USA. At the moment the silent agent is also splitting rocks in her work Matter of Time in Varbergs Konsthall in Sweden. Palosaari is also finalizing (until June 2018) a large public art work for Uppsala Academic Hospital in Sweden.
www.saripalosaari.com

Lise Bjørne Linnerts (NO)
Sting
Sting starts from a personal story. In 2009 I had to go through a thorough surgery that caused pain and a long recovery time. I used the situation to research pain. A daily objective study knotting knots in thin silk thread. The project lasted 92 weeks. I attached the knots to week plans and framed them. Pain can be invisible and silent, yet constant and load. The viewer is invited to see the work through magnifying glasses. Across a variety of media, Linnert´s process-based work explores concepts of intimacy, presence and an interaction between an individual and the masses. Her work has been exhibited domestically and internationally, at places such as: Stenersen Museum, Oslo, Norway, Pallat House Gallery, Chichester, UK, The Station Museum of Contemporary Art, Houston, USA, Charlottenborg Kunsthal, Copenhagen, Denmark. www.lisebjorne.com

Marja Helander (FI)
Trambo, 2014
An indigenous Sámi woman wandering on a snowy mountain, dragging a big trampoline, a burden she hopes will bring a bit of joy to the monotonous journey of life. The trampoline is a reference to the modern age, but it can also be seen as a prison. The round shape of the trampoline, the jumping and the sound that it makes also refer to shamanism as my people’s long-lost heritage. Another way of seeing the video is as a dreamlike state, a glimpse into another world.
Dolastallat
Helander’s recent video work Dolastallat won the Kent Monkman award for best experimental at imagineNATIVE Film + Media Arts Festival in Toronto, 2016.  www.marjahelander.com

Nina Backman (FI)
Aino Metronatural – Silence Protest
Aino Metronatural is a series of work by the Finnish born and Berlin-based artist Nina Backman. The performance piece originates from the Finnish epic Kalevala. It explores the themes of transformation, change and nature. The performance series started in 2006 and has so far consisted of installations, photography and video.
Nina Backman works in the margin between installation, performance and visual art. Her work confronts the viewer with the complicity of the human condition and asks about life concepts, identities and values. She works and exhibits internationally. www.ninabackman.com

Lene Berg (NO)
Shaving of the Baroness
Video / Screened 7th of November
Shaving the Baroness can be seen as a homage to the Baroness Elsa von Freytag- Loringhoven, who died in poverty and has been forgotten by history. But the decisive factor for me making the film was the central idea about the essence of moving images. It shows a unique moment where the past and the future are not important. It involves a certain risk and a certain ambiguity. The main character is transformed, yet no story in the conventional sense of the word is taking place. The situation is intimate and the experience would normally not be possible to share with others unless it was documented. Even if what can be seen already belongs to the past, it will always take place in the present whenever the film is screened, be it a hundred years from now or a hundred years ago.