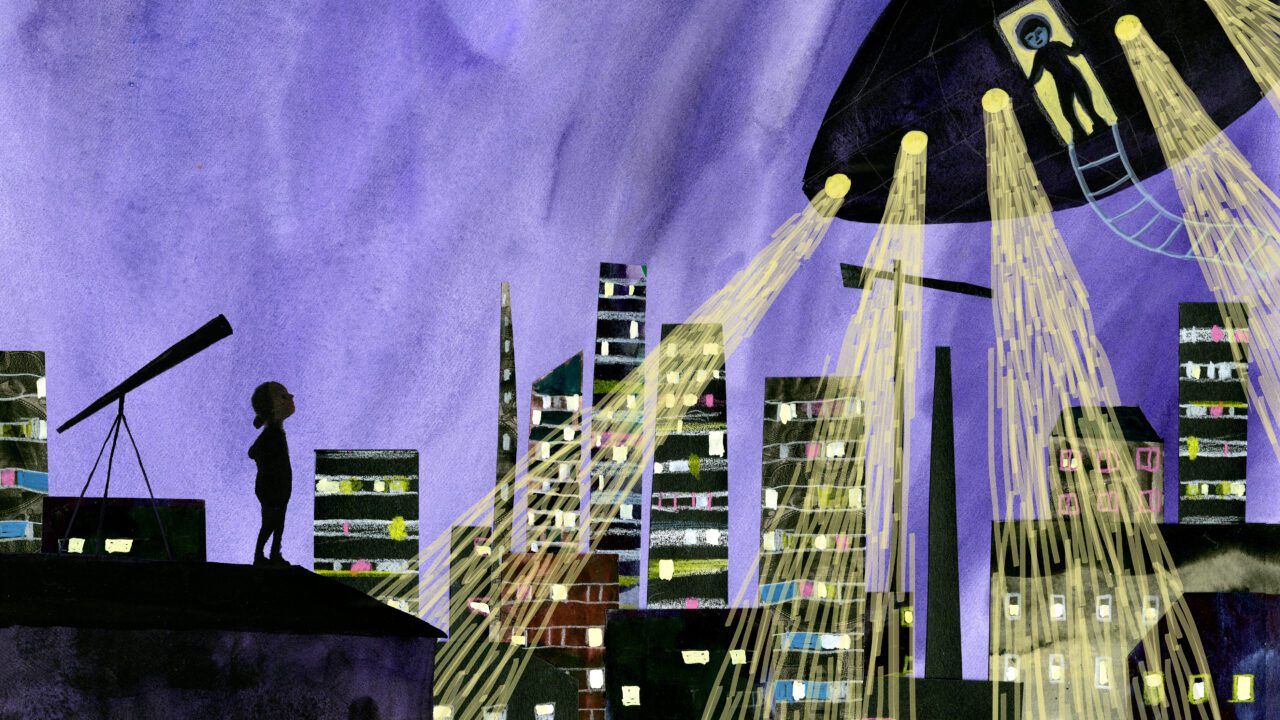 Liv is a girl that lives on the top floor in a house in the city, just beneath the starry sky. Liv’s father has told her that space is constantly expanding, like a balloon that is being blown up more and more. With her telescope, Liv looks up into space and takes on a journey in a spaceship with a girl that has been travelling in space since the Space Race many decades ago. In space, light years away from Earth, Liv gets to visit a planet which is the home of her new friend as well as a lonely black dog. How would life be away from the citylights and what Liv calls a home? How would you think it would be like to experience the world from far above?

Welcome to our new children’s exhibition Liv in Space which is inspired by an illustrated story of the same name, created in collaboration between Zakiya Ajmi (b. 1992) and Sara Lundberg (b. 1971). The story and illustrations were published earlier this year (2022) in the anthology The Length and Breadth of the Nordic Region. The anthology was produced by the Nordic House as a part of the three-year project LØFTET, which is funded by the Nordic Council of Ministers. This edition is the last in the anthology in a series of three, all of which are the result of Nordic collaboration between various researchers, publishers, authors and illustrators who have had the opportunity to work together at the project’s annual summer seminars.

Welcome to the children’s library, where we hope you and your child have an inspiring space experience!

An new game, now in the children’s library:
Spacedog hunt!  Fun game for the whole family!

In the story Life in the Universe the space girl has a dog. It doesn´t have a name but it is most likely inspired by the dog Laika, who became the first living creature sent into space, in November 1957. Ten space dogs, in different sizes, are placed around the library inside the exhibition. Those who can spot all the dogs can write down the answers, put in a mailbox at the exhibition and become a part of a competition. In the end of August, the winner will be announced and will receive spacey awards!