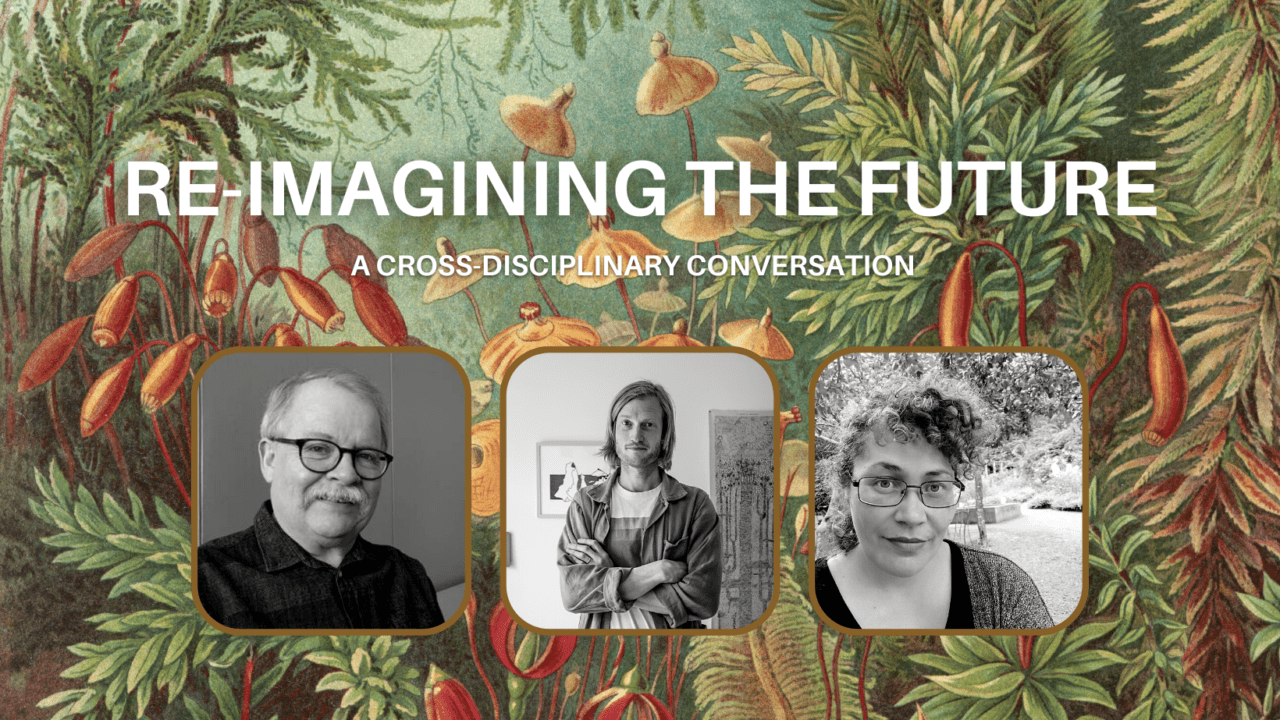 Now, more than ever, we need narratives that illuminate other ways of living and being. Social imagination, catalyzed by compelling stories, might be a key ingredient for a green and just transformation.

Stories that depict the future of humanity from a bleak, dystopian and apocalyptic perspective are omnipresent in liturature, films and other mediums. Considering the multiple crises we are facing  – climate breakdown, biodiversity loss, war and social unrest – it is perhaps not surprising that many storytellers gravitate towards „doom and gloom“ in their portrayal of what‘s to come.

BUT – is it possible to imagine a future where humans actually manage transform their societies, and live in better synchrony with nature, other species and each other? Where are the stories that show us what a sustainable and fossil-free society could look like, and better yet – how we could get there?

The Nordic House invites you to join a cross-disciplinary conversation, where Azucena Castro, PhD in Spanish and Literature and Postdoctoral fellow at Stockholm Resilience Centre, and Skúli Skúlason, Professor of Biology at Hólar University, address these questions. Sverrir Norland, prolific author, translator and publisher, will moderate the conversation. Further information about the participants can be found here below.

The event will take place in English. Light refreshments will be served, and drinks can be purchased at SÓNÓ Matseljur.

Azucena Castro studies cultural imaginations of climate and energy futures with a focus on multispecies justice in Latin American and Caribbean future fictions from the end of the twentieth century to the present. She is interested in emergent expressions of biocultural rights in artistic, literary and philosophical writings that formulate diverging environmental futures beyond apocalypse. Azucena Castro is a Swedish Research Council Postdoctoral fellow at Stockholm Resilience Center, Stockholm University and a Postdoctoral fellow at the Department of Iberian and Latin American Cultures, Stanford University. During 2021, she was a Postdoctoral researcher at the Institute of Geography, Universidad de Buenos Aires. She holds a PhD in Spanish with orientation to Latin American literatures and cultures from Stockholm University. Her main research areas are environmental and energy humanities and Latin American cultural studies.

Skúli Skúlason is a professor in the Department of Aquaculture and Fish Biology at Hólar University, and the Icelandic Museum of Natural History. His work and research concern the ecology and evolution of biological diversity in Iceland. His approach also considers ethical and philosophical aspects of nature. He has participated in governmental programmes, such as The Icelandic Master Plan for Nature Protection and Energy Utilization. He currently chairs the board of BIODICE, a network of people, institutions and societies, promoting greater awareness and understanding of biodiversity in Iceland.

Sverrir Norland is an Icelandic author, translator, publisher, and speaker. His latest book is Stríð og kliður (War & Noise, 2021), a personal essay on nature, technology, and the human imagination, which was met with great acclaim in his native country. Sverrir has also published two novels with Forlagið, Iceland’s leading publishing house: Kvíðasnillingarnir (Masters of Anxiety, 2014) and Fyrir allra augum (In Plain Sight, 2016), as well as making programs for both radio and TV. Sverrir runs a small publishing house called AM forlag, and has translated, from both French and English, books by Maurice Sendak, Tomi Ungerer, Pénélope Bagieu, and Carson Ellis, among others.