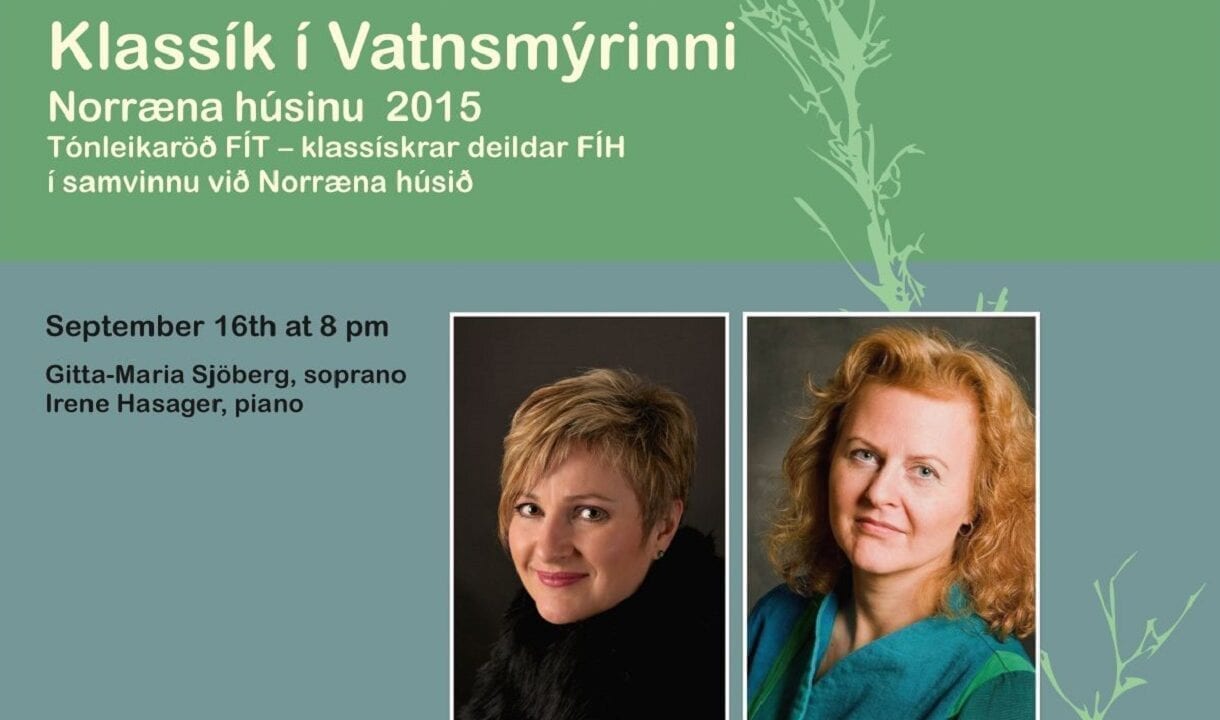 The next concert of the 2015 season in the concert series of the Icelandic Soloist Society and the Nordic House, will take place at the Nordic House in Reykjavík, Wednesday September 16th at 8 pm. Again we welcome guests from the other Nordic countries; the Swedish soprano Gitta-Maria Sjöberg and the Danish pianist Irene Hasager. They will perform works by Jean Sibelius, Carl Nielsen, Matti Borg, Antonin Dvorak, Giuseppe Verdi, Dmitri Shostakovitch and Joaquín Rodrigo. On September 17th Gitta-Maria will also give master-classes at the the Sigurður Demetz School of Singing in Reykjavík.

Gitta-Maria Sjöberg has an impressive career, singing both lieder and operas, with around 40 roles in her repertoire. She is a worthy successor to her compatriot Birgit Nilsson and became the first to receive the award from the foundation that is named after this famous diva.

Irene Hasager is in great demand as an accompanist and as a coach. She has played concerts in Denmark and other countries such as France, Italy, Germany, Russia, Greenland, Sweden and Norway.

Admission fee is ISK 2000, ISK 1000 for senior citizens and disabled; free for students, 25 years old and younger. Tickets are available at the entrance.

About the 2015 concert series
The aim of the series, Klassík í Vatnsmýrinni, is to give the audience a chance to hear the very best of Icelandic and foreign artists perform classical music.
As the year of 2015 marks 100 years anniversary of the Voting rights for Women in Iceland, so the female singer has been prominent in this seventh year‘s programming.
In October the Icelandic pianist Jón Sigurðsson performs a program with Alexander Scriabin’s piano compositions. At the final concert of this season the soprano Auður Gunnarsdóttir and pianist Helga Bryndís Magnúsdóttir will perform Frances Poulenc’s opera The Human Voice.
The concert series is a collaboration between the Icelandic Soloist Society and the Nordic House.
Management concert series is responsible for the implementation and planning as well as artistic direction. Concert Board members are: Kristin Mjöll Jakobsdóttir, Hlíf Sigurjónsdóttir and Anna Jónsdóttir.

The Swedish soprano Gitta-Maria Sjöberg studied singing with Kim Borg at the Opera Academy of the Royal Danish Theatre in Copenhagen. Her debut in 1987, as Mimi in Puccini’s opera, La Boheme, at the Royal Danish Theatre was the beginning of her very impressive career which has taken her all around the world with a repertoire of more than 40 roles.
Gitta-Maria is an extremely versatile singer, equally proficient in lieder and dramatic opera roles. She has performed lieder concerts around Europe, in St Petersburg, Tokyo and elsewhere and appeared on numerous CDs with a great reputation.
Gitta-Maria is very popular and sought after as a teacher and supervisor. In 2014 she founded the festival Nordic Song Festival in Sweden as an inspiring mixture of masterclasses, concerts and artistic research.

The Danish pianist Irene Hasager studied at the Royal Academy of Music in Aarhus, Denmark under the guidance of the Hungarian pianist Georg Vasarhelyi. She furthered her studies in Germany and France. Irene has accompanied the students of Kim Borg at the Royal Danish Conservatory in Copenhagen. She is also very active as a coach and has directed performances and operas, e.g. Undergrunden, Musikdramatisk Teater, Operafabrikken, Den Fynske Opera, Den Jyske Opera, The Royal Danish Theater and the Royal Danish Music Conservatory.
Irene is a very sought after as an accompanist with singers and instrumentalists and has played concerts, e.g inFrance, Italy, Germany, Russia, Greenland, Sweden and Norway besides her home country